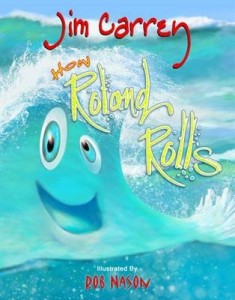 “How Roland Rolls” will be released by the publisher Some Kind of Garden Media on September 24, 2013.

You can pre-order your copy here.

HOW ROLAND ROLLS is a story about a wave named Roland who’s afraid that, one day, when he hits the beach, his life will be over. But when he gets deep, he’s struck by the notion that he’s not just a wave — he’s the whole big, wide ocean! The story shows humanity’s interconnectedness through the metaphor of a wave in the ocean.

The book is lavishly illustrated by Rob Nason, who won a Golden Reel award for his work as Art Director on the film Anastasia, as well as an Annie Awards nomination. His work on Thumbelina garnered the Hans Christian Andersen award. His cover for the inspiring grass-roots children’s book, Saltwater Taffy, was nominated as Cover of the Year and was a finalist for the prestigious Benjamin Franklin award.

Jim Carrey is an award-winning actor/artist/activist. The winner of two Golden Globe awards — Best Actor for Man on the Moon and The Truman Show – he was also nominated for a Best Actor Golden Globe for his critically acclaimed performance in Eternal Sunshine of the Spotless Mind. Carrey has appeared in 33 feature length films, is one of Hollywood’s most successful actors, and is known for his humanitarian efforts.

Rob Nason is recognized as one of the world’s premiere illustrators and animators, awarded for his work on a variety of feature films. Nason’s artwork for the inspiring children’s book Saltwater Taffy was nominated as Cover of the Year and was a finalist for the prestigious Benjamin Franklin Award in 2012.

A Letter From Jim Carrey To The Grown-Ups

Hi, there! Jim Carrey here. I know you recognize me from a whole raft of fairly wacky movies … and quite a few pretty serious ones, too. But I’m reaching out to you and your children now for a different purpose.

So many children today are suffering from their parents’ busy lives, how much time and energy it takes just to provide for the family and keep the household working. Often, the kids are relegated to electronic games, TV, and surfing the Internet – all poor substitutes for parental engagement. We need to have things we can enjoy together.

I wrote How Roland Rolls specifically as a way for parents and grandparents to enjoy some quality hang-time. I hope the message of the story will help them feel connected, worthwhile, and a part of something vast and grand. Personally, I believe that time spent telling them a bedtime story is as close to heaven as we will get in this world.

To be a part of that heaven is my ultimate goal. And to make some kids happy … ‘cuz that’s how I roll.