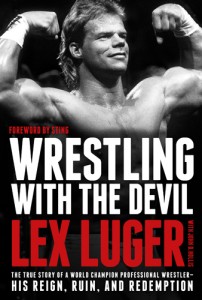 Lex Luger, 2 time WCW heavyweight champion, will be signing copies of “Wrestling With the Devil” at the following location:

Lex Luger, wrestling megasensation and three-time world heavyweight champion, ruled the ring for years as “The Total Package.” Whether he was making a dramatic entrance from a helicopter, defeating champ Hulk Hogan, or sculpting a near-perfect physique, Lex was on top of his game. Yet backstage, he was wrestling with addictions to sex, drugs, and alcohol—things he clung to even when his mistress died suddenly of a drug overdose and Lex went to jail. There, Lex faced the truth: he was losing the fight for his life. And still awaiting him was his most brutal opponent yet, when the wrestling champ found himself helplessly paralyzed from the neck down. In Wrestling with the Devil, Lex Luger reveals never-before-told stories from his career, his struggle with personal demons, and how, through unexpected faith, grace, and redemption, he overcame all odds to fight the only battle that really matters.