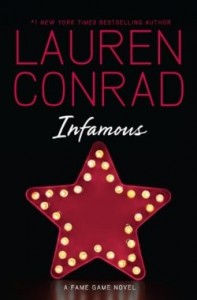 Lauren Conrad, star of the reality television show “The Hills,” will be signing copies of Infamous.

As the star of MTV series The Hills, Lauren Conrad understands Hollywood life. She uses insider knowledge to tell the story of Madison Parker, Kate Hayes, and Carmen Curtis, stars of The Fame Game, the reality TV show that follows the girls as they try to become famous in L.A.

Kate and Carmen are about to become big stars, but they’re going to have to survive some backstage drama first. Madison is learning hard lessons about fame as she deals with backstabbing “friends” and family, out-of-control paparazzi, and a scandal reported in every tabloid.