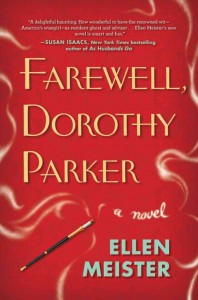 What if inspiration came to visit…and wouldn’t leave?

When it comes to movie reviews, critic Violet Epps is a powerhouse voice. But that’s only because she’s learned to channel her literary hero, Dorothy Parker, the most celebrated and scathing wit of the 20th century.

If only Violet could summon that kind of courage in her personal life.

Determined to defeat her social anxiety, Violet visits the Algonquin Hotel to pull strength from the hallowed dining room, where Dorothy Parker and so many other famous writers of the 1920s traded barbs. But she gets more than she bargained for when Dorothy Parker’s feisty spirit rematerializes from an ancient guestbook and hitches a ride onto her life.

Violet is shocked and thrilled to be face-to-face with her idol, but when the gin-swilling writer takes up residence in her home and grows pricklier and more outspoken by the day, the timid movie critic is pushed to her limit. With her job threatened, her new relationship in tatters, and the custody fight for her orphaned niece in jeopardy, Violet is forced to face her fears …and she makes sure Mrs. Parker does the same.

Wickedly funny and surprisingly poignant, Farewell, Dorothy Parker perfectly re-imagines one of America’s most iconic voices in a captivating and unforgettable tale.