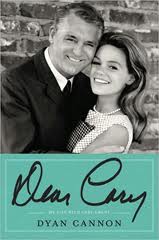 He was the ultimate star, defining Hollywood glamour as well as cinematic achievement. She was a bright new actress, beautiful and funny, who would one day prove her talent by being the first woman to receive Academy Award nominations for her work on-screen and behind the camera. On his arm, she found herself traveling in the inner circles of power and glamour in which Cary Grant was king among the Hollywood royalty. Behind closed doors, she discovered a Cary no one knew: a thoughtful, caring, and private person, with dark family secrets that weighed heavily on him.

With unparalleled honesty, Dyan Cannon shares the heartwarming and heartbreaking story of her magical romance and stormy marriage to screen legend Cary Grant. Featuring rare photographs and never-before-seen letters and notes from Cary Grant, Dear Cary is told with poignancy and hard-won wisdom, a story for anyone who has ever loved and lost.