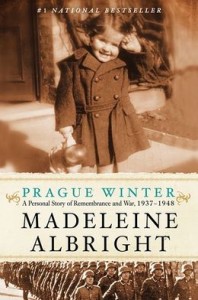 Madeleine Albright, the first woman to become the United States Secretary of State, will be signing copies of “Prague Winter,” her new book. This title will be released on February 19, 2013.

Before Madeleine Albright turned twelve, her life was shaken by the Nazi invasion of her native Prague, the Battle of Britain, the near-total destruction of European Jewry, the Allied victory in World War II, the rise of communism, and the onset of the Cold War. Drawing on her memory, her parents’ written reflections, interviews with contemporaries, and newly available documents, Albright recounts a tale that is by turns harrowing and inspiring.

In Prague Winter, Albright reflects on her discovery of her family’s Jewish heritage many decades after the war, on her Czech homeland’s tangled history, and on the stark moral choices faced by her parents and their generation. At once a deeply personal memoir and an incisive work of history, Prague Winter serves as a guide to the future through the lessons of the past—as seen through the eyes of one of the international community’s most respected and fascinating figures.