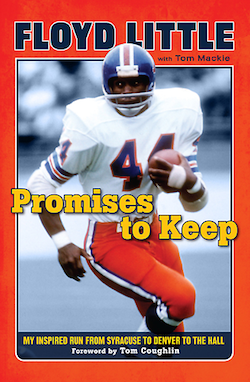 This autobiography traces the life of Floyd Little who was raised in poverty in New Haven, Connecticut, was bowlegged, sent off to military school, and told his IQ was too low to even consider college. He overcame those obstacles to become a three-time All-American football player at Syracuse University and one of the best NFL running backs of his era with the Denver Broncos. After football, he earned a law degree and ran a successful automobile dealership for more than 25 years. In Promises to Keep, Floyd Little reflects on a lifetime of beating the odds and achieving excellence on and off the field. He shares his memories from his record-setting seasons at Syracuse and in Denver and reflects on his long, unconventional road to the Pro Football Hall of Fame.

Floyd Little was the first draft pick to ever sign with the Denver Broncos. Known as “the Franchise,” he played in five Pro Bowls, was elected into the Pro Football Hall of Fame, the College Football Hall of Fame, and the Broncos Ring of Fame. He lives in Syracuse, New York. Tom Mackie is a freelance writer and member of the Pro Football Writers Association of America. They are the coauthors of Floyd Little’s Tales from the Broncos Sideline. He lives in Princeton, New Jersey. Tom Coughlin is a Syracuse graduate and the head coach of the NFL’s New York Giants. He led the Giants to victories in Super Bowl XLII and XLVI. He lives in Park Ridge, New Jersey.