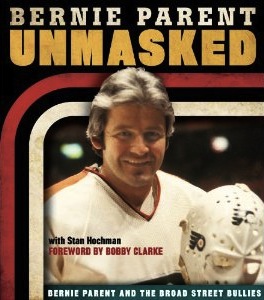 In a city known as home to some of the sporting world’s biggest stars, few have ever shined as brightly as the Philadelphia Flyers’ Bernie Parent, and this autobiography shares how he became one of the most sensational goalies in NHL history. The catchphrase “Only the Lord saves more than Bernie Parent” became ubiquitous in Philadelphia as Parent won two Vezina Trophies as the league’s top goaltender, two Conn Smythe Trophies as playoff MVP, and two Stanley Cup championships, but this work shows how his on-the-ice exploits were only a part of his amazing story. After suffering a career-ending eye injury in 1979, Parent’s life took a turn for the worse, a time during which he battled alcoholism and watched his marriage end in divorce. In the end, however, facing the fears that had plagued him all his life led Parent to find solace and happiness once again. In Unmasked, Parent traces his life and career from his days as a youngster learning to skate to his current role as a Flyers ambassador and public speaker. Featuring rare photos from his personal archive and accompanying text from legendary Philadelphia sports columnist Stan Hochman, this life story gives Parent’s millions of fans a never-before-seen glimpse into the life of a hockey icon.

Bernie Parent is a NHL Hall of Fame goaltender and one of the most popular players in Philadelphia Flyers history. He led the team to back-to-back Stanley Cups in 1974 and 1975. He lives in Cherry Hill, New Jersey. Bobby Clarke is a former player for the Philadelphia Flyers and a member of the NHL Hall of Fame. In retirement, he has twice served as the Flyers’ general manager and is currently the team’s senior vice president. He lives in Philadelphia. Stan Hochman is a columnist for the Philadelphia Daily News and has been a part of the city’s sportswriting landscape for 50 years. A member of the Philadelphia Sports Hall of Fame, he has been named Pennsylvania Sportswriter of the Year on three occasions. He was also awarded the Nat Fleischer Award as Boxing Writer of the Year, as well as a four-time recipient of the Red Smith Trophy for coverage of the Kentucky Derby. He lives in Wynnewood, Pennsylvania.