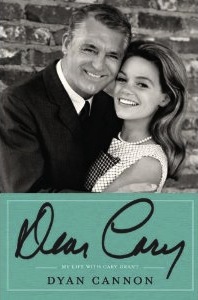 Dyan Cannon, star of “Deathtrap” and “Heaven Can Wait” will be signing copies of her memoir detailing her relationship with former husband, Cary Grant, titled “Dear Cary: My Life with Cary Grant.”

Cannon is an American award-winning film and TV actress, a director, screenwriter, editor, and producer. Her debut film role was in the 1960 The Rise and Fall of Legs Diamond. Some of her other notable films include Revenge of the Pink Panther (1978), Deathtrap (1982), Caddyshack II (1988), Out to Sea (1997). A regular on Ally McBeal, she’s also appeared on the TV shows Diagnosis: Murder and The Practice. She married Cary Grant in 1965 and by 1968, the couple were divorced. They had one child together, their daughter Jennifer, who is also an actress.

He was the most charming, handsome, romantic, and famous leading man in the world….what could possibly go wrong?

With unparalleled honesty, Dyan Cannon shares the heartwarming and heartbreaking story of her magical romance and stormy marriage to screen legend Cary Grant. He was the ultimate star, defining Hollywood glamour as well as cinematic achievement. She was a bright new actress, beautiful and funny, who would one day prove her talent by being the first woman to receive Academy Award nominations for her work on-screen and behind the camera.