A living legend of Country Music and a worldwide music icon, superstar Kenny Rogers has enjoyed a fascinating five decades in show business, and he tells the full story of his remarkable life and career in Luck or Something Like It. From his days with hit group The First Edition to his sterling solo work, the artist who “knows when to hold ’em and knows when to fold ’em” knows how to tell a captivating life story as well?bringing a golden era of Country Music to life as he recounts his remarkable rise to the top of the charts. An honest, moving, eye-opening view of a musician’s life on the road, Luck or Something Like It is the definitive music memoir?a backstage pass to fifty years of performing and recording presented by the one and only Kenny Rogers, one of the bestselling artists ever.

As a singer-songwriter, Kenny Rogers has won hundreds of awards and charted more than 120 hit singles, but beyond his busy marital life (five marriages) and his Kenny Rogers Roasters eateries, most of us little about this surprisingly reticent man. This memoir changes that. Luck or Something Like It reveals how the young Houston musician experimented with doo-wop, jazz, and mainstream pop before settling into the country genre for which he’s been known. It also describes how his deep faith and the importance to his life of artists including Elvis Pressley, Dolly Parton, and Ray Charles. He also delineates his complicated relationship with the Nashville country music establishment, revealing how his evolving musical preferences sometimes made him an outsider among purists. 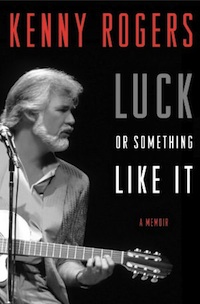