If you will not be able to attend this event, you can still order a Signed First Edition of “How I Got This Way” here. Signed copies are being made available on a first come, first served basis through our own online store at veryfinebooks.com.

Sure, he’s an excitable guy.
Sure, he loves to complain.
But Regis Philbin loves life . . . and with the wildly unpredictable one he’s led so far, who wouldn’t? After five decades in show business—and nearly 17,000 unforgettable hours on television—he has a lifetime’s worth of stories to share.

Whether he’s revealing what really drove him “bonkers” on the set of Seinfeld, how he survived the first known bomb scare on live TV, what Jack Nicholson said about his beautiful leading ladies during their guys’ night out together, or poignant memories of his last moments with his idol and dear friend, Jack Paar, Regis packs every page with his signature heart, wit, dynamic energy, and gratitude for everything life has brought him.

Regis Philbin has been entertaining television audiences for more than fifty years, in daytime reigning as a beloved morning-show host, in nighttime as an Über game-show host, and also as a fixture on national and local late-night shows. He is most widely known for Live! With Regis and Kathie Lee and its subsequent incarnation Live! With Regis and Kelly; Who Wants to Be a Millionaire; Million Dollar Password; and the first season of America’s Got Talent. Regis is the proud recipient of five Emmy Awards, including a Lifetime Achievement Award from the National Academy of Television Arts and Sciences, a Broadcasting & Cable Lifetime Achievement Award, the Walter Camp Distinguished American Award at Yale University, and a star on the Hollywood Walk of Fame. In 2006 Regis was inducted into both the National Association of Broadcasters Hall of Fame and the Television Academy’s Hall of Fame. Regis lives in New York and Connecticut with his lovely wife, Joy. 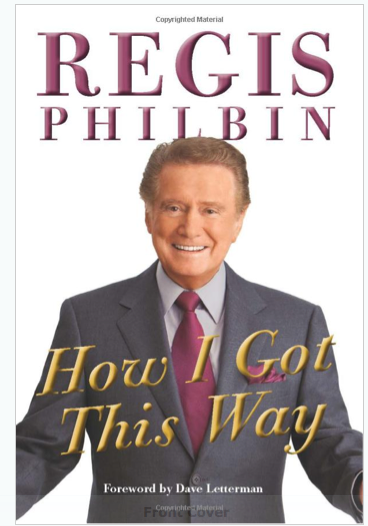