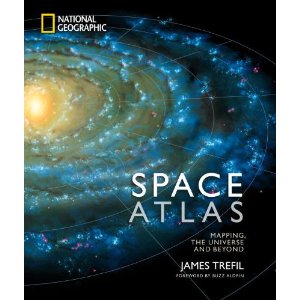 Coming November 6th, 2012. Space Atlas: Mapping the Universe and Beyond

. Buzz Aldrin has done several signing events for his last book. Let’s hope he does more when this one is released.

“Filled with lavish illustrations, this book

is a grand tour of the universe. Three ever widening domains are presented–the planets, the stars, and the large scale universe itself–each including the ones before it and extending outward.

The tour starts close to home within the first domain, our own solar system. There is a tremendous variety here, from the sun scorched rocks of Mercury to the icy vastness of the Kuiper Belt beyond Pluto. We see the sun and planets born from the collapse of an interstellar dust cloud whose atoms were themselves created in long dead stars. Since many of these planets have been visited by space probes or landers, we are able to benefit from the incredible technology of exploration developed by NASA and its counterparts in other countries.

The second domain is made up of the billions of stars in our own Milky Way galaxy. We walk in the steps of the American astronomer Edwin Hubble, who first established that the universe is made up of discrete galaxies, then go on to examine the fundamental constituents of those galaxies–the stars. We see stars not as eternal lights in the sky, but as objects born out of a desperate struggle between pressure and gravity. We trace the life cycle of our own sun, from its birth 4.5 billion years ago to its quiet end 6 billion years in the future. We see the galaxy not as a serene and placid place, but as a giant factory, where primordial material is taken up into stars, then returned to the galaxy enriched with the heavy elements necessary for life.

Finally, we move to the ultimate domain–the large scale structure of the universe itself in which galaxies are the building blocks. We discover the most amazing fact, that the solid stuff of stars and planets on which we have been concentrating up to this point make up only a few percent of the mass in the universe, with the rest being composed of two mysterious entities called, respectively, dark matter and dark energy. We descend into deep caverns to see scientists trying to detect dark matter as it sweeps by the Earth, and we talk to theorists trying to solve the riddle of dark energy. This quest brings us to the frontier of knowledge, the edge of the unknown.

To conclude, two ultimate questions remain: How did the universe begin? How will the universe end? We trace our theories back to the first fraction of a second of the life of the universe and listen to the speculations of cosmologists about how it might all have started.”

This particular atlas is now available for pre-order.