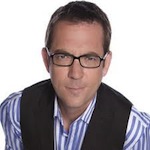 Ted Allen will be making an appearance tomorrow , to promote his new book called ““In My Kitchen”.

For a complete schedule that includes hundreds of events each month, be sure to sign up to Book Signing Central today.

A cookbook for people who love to cook

Ted Allen is an American writer, cookbook author, and television personality. His newest cookbook, In My Kitchen, comes out from Clarkson-Potter publishers on May 1, 2012. He was the food and wine connoisseur on the American Bravo network’s Emmy-winning television program Queer Eye. He now is the host of the prime-time series Chopped, a culinary competition called “the crown jewel of Food Network” by the New York Post, in which four chefs per episode attempt to cook their way through three courses to win a $10,000 prize. He is a longtime contributing writer to Esquire magazine, the author of two cookbooks, and regularly appears on the Food Network’s show The Best Thing I Ever Ate and other television cooking shows.