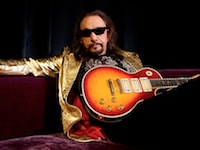 Ace Frehley, founding member and lead guitarist of the rock band KISS from 1973-1982 will be touring his long-awaited memoir, No Regrets. Frehley played with the band from 1973 until his first separation from them in 1982 when he embarked on a solo career and formed the band Frehley’s Comet. The 1995 KISS reunion for MTV Unplugged, followed by a formal reunion announcement at the following year’s Grammys, marked the first time all the original members had played together again since 1979. Frehley again stayed with the band on and off until 2002. Frehley recorded a total of 16 albums with KISS and has thus far recorded 5 solo albums as Frehley’s Comet. His most recent solo album, Anomaly, was released in September of 2009. No Regrets delves into the dark side offstage and behind the makeup.

THE MUSIC, THE MAKEUP, THE MADNESS, AND MORE. . . . In December of 1972, a pair of musicians placed an advertisement in the Village Voice: “GUITARIST WANTED WITH FLASH AND ABILITY.” Ace Frehley figured he had both, so he answered the ad. The rest is rock ’n’ roll history.He was just a boy from the Bronx with stars in his eyes. But when he picked up his guitar and painted stars on his face, Ace Frehley transformed into “The Spaceman”—and helped turn KISS into one of the top-selling bands in the world. Now, for the first time, the beloved rock icon reveals his side of the story with no-holds-barred honesty . . . and no regrets.For KISS fans, Ace offers a rare behind-the-makeup look at the band’s legendary origins, including the lightning-bolt logo he designed and the outfits his mother sewed. He talks about the unspoken division within the band—he and Peter Criss versus Paul Stanley and Gene Simmons—because the other two didn’t “party every day.” Ace also reveals the inside story behind his turbulent breakup with KISS, their triumphant reunion a decade later, and his smash solo career. Along the way, he shares wild stories about dancing at Studio 54 with “The Bionic Woman,” working as a roadie for Jimi Hendrix, and bar-flying all night with John Belushi. In the end, he comes to terms with his highly publicized descent into alcohol, drugs, and self-destruction—ultimately managing to conquer his demons and come out on top. This is Ace Frehley. No makeup. No apologies. No regrets.

Ace Frehley is a founding member and former lead guitarist for the legendary rock band KISS, which has sold more than 100 million albums worldwide and is ranked among the top-selling rock bands of all time. 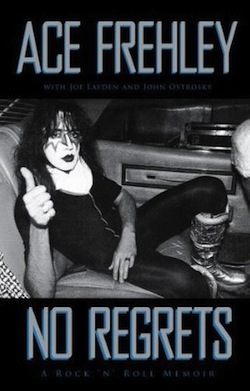