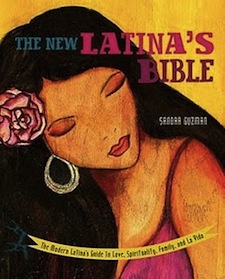 Emmy Award-winning journalist Sandra Guzman has written a follow-up to her 2002 “The Latina’s Bible” and she’s invited actress Rosie Perez to join her in celebrating the release this May. The pair will be on hand to sign copies in New York City.

The New Latina’s Bible is now in stock.

Guzman is the former editor-in-chief of Latina magazine and a former associate editor at the New York Post where she edited the Black History Month section and the Harlem Week Section. In 2009, Guzman was fired from her position at the New York Post after speaking out against a “stimulus package” cartoon depicting an “unnamed author” (President Obama) as a monkey. Having produced hundreds of stories for Good Day New York and Telemundo, covering politics, education, arts and culture, and women’s issues, Guzman won the Emmy for “Embargo Contra Cuba.”

Puerto Rican American actress Rosie Perez was born in Brooklyn and moved to Los Angeles during high school. A dancer/choreographer as well as an actress, Perez’s career began in the late 80s as a dancer on Soul Train. She has choreographed music videos for Janet Jackson, The Boys, Bobby Brown, Diana Ross, and LL Cool J. Perez is an activist for Puerto Rican rights and was appointed by President Obama in 2010 to The Presidential Advisory Council on HIV/AIDS (PACHA). She directed the 2005 film Yo Soy Boricua! Pa’ Que Tu Lo Sepas! (I’m Puerto Rican, Just So You Know!) and she is chair of the artistic board for Urban Arts Partnership in New York.

From the Publisher
In this new edition of a book that’s been a go-to guide for young Latinas for years, award-winning journalist Sandra Guzman tackles the real-world complications facing Latinas today. With warmth, humor, and wisdom, The New Latina’s Bible explores a wide range of issues, touching on everything from family to dating to the workplace. Guzman offers helpful tips on improving self-esteem, and provides simple, easy-to-follow women’s health advice. New chapters take on important topics like sexual abuse, domestic violence, interracial relationships, and LGBTQ issues.

In The New Latina’s Bible, Guzman shows other Latinas that they are not alone in the day-to-day dilemmas that they encounter, and that understanding these challenges can strengthen and empower them as women. A must-read for any Latina who faces the trials of living, loving, and dreaming in two worlds—the old world of their mamá, tías, and abuelitas, and the new world in which they are immersed—this comprehensive book helps to bridge the gap between the dual realities that shape and define the nueva Latina.