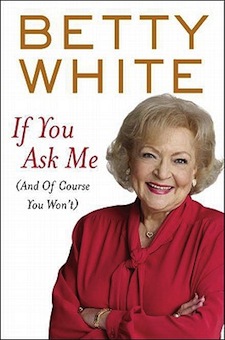 TV legend Betty White has a new book about to be released – “If You Ask Me” – and she’ll be appearing in several cities to sign copies for fans.

This is a fairly recent title. If you are not able to attend any of the events posted below, signed first editions of this book are now available.

White’s career spans seven decades and she is famous for numerous iconic roles including the self-absorbed Sue Ann on The Mary Tyler Moore Show and the lovable dimwit Rose on The Golden Girls. She is the recipient of three American Comedy Awards, seven Emmys, and has been Emmy nominated a total of twenty times throughout her career. In 1995, White was inducted into the Television Hall of Fame. She is the last surviving Golden Girl.

White is a longtime animal rights activist and pet enthusiast. In 1987 she was presented with the Humane Award by the American Veterinary Medical Association. And in 2006, the City of Los Angeles named her “Ambassador to the Animals” at a dedication ceremony, presenting her with a bronze plaque that hangs near the Gorilla Exhibit at the Los Angeles Zoo.

On May 8, 2010, at age 88, White became the oldest person to date to have ever hosted SNL. This appearance took place after a Facebook campaign called “Betty White to Host SNL (Please)” that began in January 2010. Check out the video clip below (and Betty, Facebook IS a huge waste of time LOL).

“If You Ask Me” will be in bookstores on May 3rd.

From the Publisher
It-girl Betty White delivers a hilarious, slyly profound take on love, life, celebrity, and everything in between.

Drawing from a lifetime of lessons learned, seven-time Emmy winner Betty White’s wit and wisdom take center stage as she tackles topics like friendship, romantic love, aging, television, fans, love for animals, and the brave new world of celebrity. If You Ask Me mixes her thoughtful observations with humorous stories from a seven- decade career in Hollywood. Longtime fans and new fans alike will relish Betty’s candid take on everything from her rumored crush on Robert Redford (true) to her beauty regimen (“I have no idea what color my hair is and I never intend to find out”) to the Facebook campaign that helped persuade her to host Saturday Night Live despite her having declined the hosting job three times already.

Featuring all-new material, with a focus on the past fifteen years of her life, If You Ask Me is funny, sweet, and to the point-just like Betty White.

3 Comments on Betty White, Book Signing Tour “If You Ask Me”