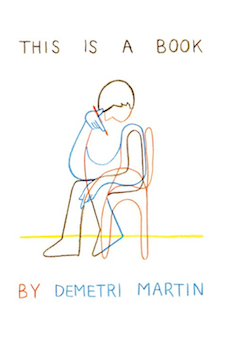 I’m very excited that one of my favorite stand-up comics, Demetri Martin, is coming to a city near me… and with a number of cities lined up for his book tour, he may be coming toward a city near you as well! Martin will be touring his new book, aptly titled “This Is A Book.”

The New York City born/ Jersey raised son of a Greek Orthodox priest (can you believe that?) has been making people laugh for a decade with his stand-up acts punctuated with illustrations, flip-charts and silly songs. He’s been a performer on Late Night with Conan O’Brien, The Daily Show with Jon Stewart, and his own Comedy Central series, Important Things with Demetri Martin.

Martin apparently has two tours in the works – one which he’s titled the “BIIG BOOK TOUR” where he’ll be signing copies of “This Is A Book” which hits shelves on April 25, 2011; and the other which is already in full swing, the “MEGA MINI TOUR” where he’ll be performing sans book. Details after the jump.

About the book
“I wrote a book called This Is A Book by Demetri Martin. It has jokes, essays, stories, drawings, charts, graphs, and palindromes in it.” –Demetri Martin

“This Is A Book” features, short stories, narrative essays, Martin’s signature drawings, as well as conceptual pieces. With “Socrates’s Publicist,” Martin takes readers on a journey to Ancient Greece; with “Palindromes for Specific Occasions” he tells the story of a lonely man’s visit to a strip club; and “Robot Test” takes us to the distant future where everyone must take a test that proves they are not a robot.

1 Comment on Demetri Martin, Book Signing Tour “This Is A Book”