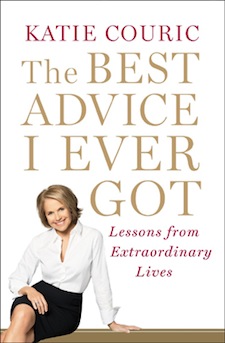 CBS News correspondent, Katie Couric, will be in Union Square next month signing copies of “The Best Advice I Ever Got: Lessons from Extraordinary Lives.” Couric is a 60 Minutes correspondent, the anchor and managing editor of the CBS Evening News with Katie Couric, and anchor of CBS News prime-time specials. Over the past 15 years, she’s covered the September 11 attacks, the 2008 presidential election, the Oklahoma City bombing, Columbine, and even put Alaskan Governor and Vice Presidential hopeful Sarah Palin through the gauntlet. Couric became the first solo female anchor of the CBS Evening News. Prior to CBS, she was a co-host of NBC’s “Today” from 1991 until 2006.

About the book
What was the tipping point for Malcolm Gladwell? What unscripted event made Meryl Streep who she is? How did Mario Batali cook up his recipe for success? In this inspiration-packed book, Katie Couric reports from the front lines of the worlds of politics, entertainment, sports, philanthropy, the arts, and business—distilling the ingenious, hard-won insights of leaders and visionaries, who tell us all how to take chances, follow our passions, cope with criticism, and, perhaps most important, commit to something greater than ourselves.

Among the many voices to be heard here are financial guru Suze Orman on the benefits of doing what’s right, not what’s easy; director Steven Spielberg on listening rather than being listened to; quarterback Drew Brees on how his (literal) big break changed his life; and novelist Curtis Sittenfeld on the secrets of a great long-term relationship (she suggests marrying someone less neurotic than you); not to mention:

• Michael Bloomberg: “Eighty percent of success is showing up . . . early.”
• Eric Stonestreet: “Remember that the old lady who’s taking forever in line is someone’s grandma.”
• Joyce Carol Oates: “Read widely—what you want to read, and not what someone suggests that you should read.”
• Jimmy Kimmel: “When in doubt, order the hamburger.’”
• Apolo Ohno: “It’s not about the forty seconds; it’s about the four years, the time it took to get there.”
• Madeleine K. Albright: “Never play hide-and-seek with the truth.”

Along the way, Couric reflects on the good advice—and the missteps—that have guided her from her early days as a desk assistant at ABC to her groundbreaking role as the first female anchor of the CBS Evening News. She reveals how the words of Thomas Jefferson helped her deal with her husband’s tragic death from cancer, and what encouraged her to leave the security of NBC’s Today show for a new adventure at CBS.

Delightful, empowering, and moving, The Best Advice I Ever Got is the perfect book for anyone who is thinking about the future, contemplating taking a risk, or daring to make a leap into the great unknown. This book is for all of us, young or old, who want to see how today’s best and brightest got it right, got it wrong, and came out on top.

Source: http://www.celebritybooksigningsandevents.com/
Amazon’s page for Katie Couric’s “The Best Advice I Ever Got”

1 Comment on Katie Couric, New York Book Signing “The Best Advice I Ever Got”