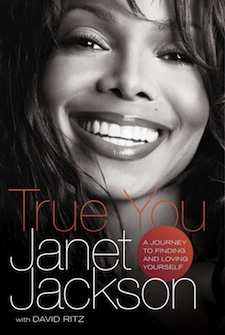 Coinciding with her current “Number Ones, Up Close and Personal Tour,” Jackson will be making a rare appearance in West Hollywood to sign copies of her bestselling book, “True You: A Journey to Finding and Loving Yourself.” Jackson is a five-time Grammy Award-winning songstress and one of the bestselling pop artists of all time. The youngest member of the Jackson family, Janet emerged as a talent in her own right in the 80s. She began her career as a TV actress with her debut role at the age of 10 on the sitcom Good Times. She recently appeared in Tyler Perry’s film, For Colored Girls.

About the book
ONE OF THE GREATEST ENTERTAINERS OF OUR TIME CANDIDLY REVEALS HER VERY PERSONAL STRUGGLE WITH AN ISSUE SO MANY OF US FACE EVERY DAY: SELF-ESTEEM

Janet Jackson emerged from the shadows of an already famous family to become one of the most beloved, recognizable, and influential performers in the world. But at what cost?

From the age of ten, when she made her acting debut on Good Times, Janet was told by Hollywood that she needed to slim down. Her well-meaning brothers, especially fun-loving Michael, teased her relentlessly until she began to believe that who she was wasn’t good enough. It was an idea that no amount of critical acclaim in television and film or, later, international platinum success in music could change.

Janet turned to food for comfort and escape. She developed a self-destructive pattern familiar to so many of us: fear and uncertainty led to bad feelings about herself and ultimately depression. The depression led to overeating. And her yo-yoing weight was painfully obvious in the bright lights of the entertainment world.

It has taken Janet most of her adult life to come to terms with who she is. But she has finally broken free of the attitudes that brought her down and has embraced realistic goals that help her eat better, exercise better, feel better, and ultimately be better.

This book is about meeting those challenges that face all of us. With candor and courage, Janet shares her painful journey to loving herself. She addresses the crazy rumors that have swirled around her for most of her life, shines an intimate light on her family, and pulls us behind the velvet rope into her unforgettable career. She also shares lessons she has learned through contact with friends and fans and reveals the fitness secrets she has learned from her trainer. Finally, her nutritionist, David Allen, unveils the wholesome, delicious recipes and lifestyle-changing tips that helped Janet get in shape—mind and spirit, heart and soul.

True You is a call to tune in to your own fundamental wisdom, to let go of the ugly comparisons, and to understand that who you are, the true you, is more than enough.

“I’m loved, I’m valued, and I’m capable of achieving balance in my life. I can learn to eat well. I can exercise. I can express gratitude for the simple act of being able to breathe in and breathe out. I can move away from darkness and depression to light and hope. I can be happy with who I am, not what I should be, or what I might have been, or what someone tells me I must be.

I am me, the true me; you are you, the true you—and that’s good. That’s beautiful. That’s enough.” —JANET JACKSON