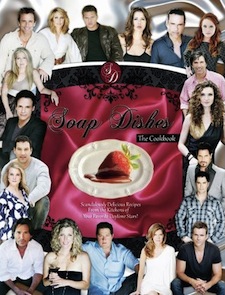 “General Hospital” stars Steve Burton, Derk Cheetwood, and Scott Reeves will be in New York City signing copies of “Soap Dishes, the Cookbook.” Authored by Burton and Cheetwood, “Soap Dishes” is a collection of the favorite family recipes of your favorite daytime stars.

Steve Burton made his daytime television debut on the sitcom “Out of This World” and his daytime soap opera debut on “Days of Our Lives” in 1986 before landing the role of Jason Quartermaine on “General Hospital” in 1991. Steve won a Daytime Emmy Award for Best Supporting Actor In a Drama Series for his role of Jason Morgan in 1998. He appeared in the Steven Spielberg Emmy award-winning mini series “Taken.”

Derk Cheetwood, a Bowling Green, Ohio native, moved west in 1992 to pursue a career in the entertainment industry. Having had great success in all mediums of film and T.V. he discovered his passion for food and cooking. Teaming up with long time friend and Co-Star Steve Burton, “Soap Dishes The Cook Book” was born.

Scott Reeves played the role of Ryan McNeil on “The Young and the Restless” from 1991–2001, and plays the role of Dr. Steven Webber on “General Hospital” since 2009. He’s also one half of the country duo Blue County. Reeves has been nominated over the years for 2 Daytime Emmy Awards and 3 Soap Opera Digest Awards, winning Outstanding Young Lead Actor for “The Young and the Restless” in 1994.

About the book
Very few things evoke true passion like a well-crafted meal. Love and food are both a universal language. SOAP DISHES: THE COOKBOOK is a marriage of these two worlds. The brightest stars of daytime share their favorite family recipes and an anecdote or two with their fans, providing an intimate glimpse into their lives. At the same time, we help out an extremely worthy cause, The Desi Geestman Foundation. The Foundation provides financial and emotional support to young cancer victims and their families. We invite our fans to cook dinner alongside their favorite daytime stars, as they share stories that evoke the sights, sounds, and smells of their childhood kitchens, or of romantic dinners prepared for their real-life loves. Combining personal photographs, engaging text, with unique and delicious recipes, SOAP DISHES is not just a cookbook. It s also an intimate look and a peek behind the curtains and into the lives and kitchens of Daytime’s hottest stars and legends alike.