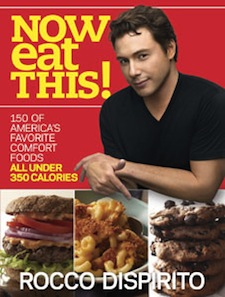 Celebrity chef and author Rocco DiSpirito will be signing copies of his new book of 150 delicious, healthy and low cal recipes, “Now Eat This!”

A graduate of the Culinary Institute of America, Rocco opened the 3-star Union Pacific in Gramercy Park in 1997. In 2003 he launched Rocco’s 22nd Street and was featured on NBC’s reality show “The Restaurant.” He’s been a regular guest judge on Bravo’s “Top Chef” and also hosts a new TV show on A&E called “Rocco gets Real,” coinciding with the publication of its companion cookbook “Rocco Gets Real: Cook at Home Every Day.”

From Booklist
“Popular television chef DiSpirito’s latest cookbook retools diet cookery in hope of convincing even the most stubborn gourmand to cut calories yet still maintain a regimen of delicious, satisfying foods not immediately perceived as diet food. To accomplish this, he takes up underused ingredients such as Greek yogurt, whole-wheat pasta, cauliflower, and reduced-sugar ketchup, whose benefits go beyond mere calorie trimming to add fiber and enhance nutrition. DiSpirito’s goal is to reduce calories in popular “comfort foods” to less than 350 per serving, and his methods yield some astonishing calorie reductions. Onion rings fall from about 1,800 calories to 342. Fried chicken loses more than half. In addition to building in lower fats, DiSpirito does his best to lower cholesterol, carbohydrate, and sodium levels as well. The frustrated gourmet compelled to address weight loss will thrill to DiSpirito’s novel approach, but it requires thorough pantry restocking.” -Mark Knoblauch

The dirty little secret about Penne alla Vodka is not the vodka but the hefty amount of heavy cream. Vodka is colorless, odorless, and without much flavor—not really attributes of a superstar ingredient. It’s the combination of cream and tomato sauce that gives this dish its signature flavor. The traditional cream is swapped here for low-fat Greek yogurt. -Rocco DiSpirito

1. Bring a large pot of lightly salted water to a boil. Add the pasta and cook according to the package directions, about 9 minutes; drain.

2. While the pasta is cooking, bring the marinara sauce and crushed red pepper to a simmer in a large nonstick saute pan over medium heat. Cook the sauce, stirring it occasionally with a heat-resistant rubber spatula, until it is slightly thickened, about 5 minutes. Remove the saute pan from the heat.

4. In a large serving bowl, toss the sauce with the drained penne and the basil. Season with salt and pepper to taste. Sprinkle the cheese on top, and serve.

Whole-wheat pasta has a dense texture that makes it a little tougher than regular pasta. Some people like that chewiness; some don’t. If you’re in the latter category, overcook it a bit. Toward the end of the cooking time, keep testing it until it’s as tender as you like it.