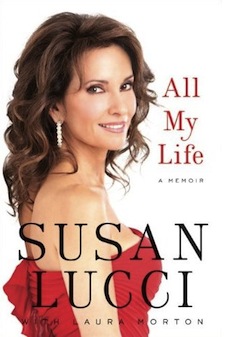 The great lady of daytime television, Susan Lucci, will be signing copies of her memoir “All My Life” which hits bookshelves on March 29, 2011.

The “All My Children” star received her own star on the Hollywood Walk of Fame on January 28, 2005 and was inducted into the Broadcasting Hall of Fame in 2006. In 1999, she FINALLY won the Emmy award for Best Actress for her role as the formidable Erica Kane after years of being nominated and narrowly missing. She’s been named one of VH1’s 200 top icons of all-time and and one of Barbara Walters’s “ten most fascinating people.” She is the recipient of the Muse Award for Women in Film & Television, the New York City Gracie Award, and the People’s Choice Award.

Pre-order your copy of “All My Life” today on Amazon.com.

About the book
“See that moon up there?
You can reach that high.
Never be afraid because you can be anything you want to be.”

Susan Lucci was only five years old when her father shared these encouraging words with her. They inspired the highly imaginative child who loved make-believe to craft one of the most enduring characters in television history, an achievement that would earn her a record twenty-one Emmy nominations—the most for an actor in the award’s history—and the crown as “Leading Lady of Daytime.”

When Lucci and All My Children were introduced to the world in 1971, American television changed forever. Susan’s character, the beautiful, spirited, and mercurial Erica Kane, was an original—the first vixen viewers loved to hate. But while millions have enjoyed getting to know Erica’s many sides—and have been awed at how this character has continually remade herself—the woman who plays her has remained a mystery.

In her long-awaited memoir, this very private actress, wife, mother, daughter, grandmother, sister, friend, and entrepreneur pulls back the curtain to reveal her story.

Susan, like Erica Kane, has undergone a metamorphosis many times. All My Life shares the stories of those transformations: starring in roles on television and stage, where she took Broadway not just by storm but “by tsunami” as one critic raved about her performance in Annie Get Your Gun; mounting successful cabaret acts (solo and with Regis Philbin); bringing art and joy back to New York in the wake of 9/11; conquering the tango with Tony Dovolani on ABC’s hit show Dancing with the Stars; and building a successful career as an entrepreneur with a signature line of products.

Susan goes beyond her success to talk about the darker moments, too, including the childhood guilt she harbored over the death of her dear grandmother, the car accident that nearly took away her career and her eyesight, her newborn son’s life-threatening illness, coping with her husband’s cancer, and the pain of miscarriage—one of the many parallels between her Erica Kane.

As charming, down-to-earth, and compelling as the woman whose story it tells, All My Life shines a spotlight on one of our most popular stars and reminds us of the power of dreams and how we can find the courage and tenacity to make them come true.

Source: Amazon’s page for Susan Lucci’s “All My Life’
http://www.celebritybooksigningsandevents.com/

1 Comment on Susan Lucci, Book Signing Tour “All My Life”