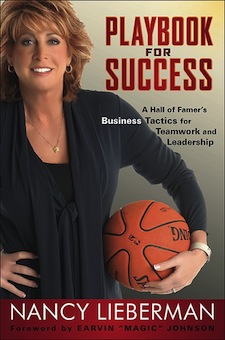 Former WNBA player and coach Nancy Lieberman, aka “Lady Magic,” will be signing copies of “Playbook for Success: A Hall of Famer’s Business Tactics for Teamwork and Leadership.” Hailing from Brooklyn, New York, Lieberman has played in the Pan American Games (1975 / 1979) and the Olympic Games (1976) in the first Women’s Olympic Basketball Team Competition. She was elected to the Basketball Hall of Fame in 1996 and the Women’s Basketball Hall of Fame in 1999. In 2009, she became the coach of the Texas Legends in the NBA Development League.

There are basics that every woman must have if she is to succeed in the corporate world, start and run her own business, or coach her own winning team. In Playbook for Success, Hall of Fame Business Entrepreneur Nancy Lieberman brings her leadership and coaching ability to the boardroom to teach professional women the same rules of success she teaches her players.

Playbook for Success is a plan to help make success a part of one’s daily routine and teach women that success is not just a title or corner office, but an attitude, belief, and way of life.

* Teaches the top sports-related skills women need to thrive in the corporate world, featuring a provocative examination of women and teamwork

* Includes profiles of women succeeding in business, ways to recognize your own strengths and weaknesses, and exercises that can be used in the business world

Playbook for Success gives you a unique and inspirational road map to compete and win in your life and career.

Nancy “Lady Magic” Lieberman has a passion for winning. One of basketball’s all-time greats, she took home Olympic silver at age eighteen, was a two-time national champion in college, led victorious teams in the WBL and WNBA, and was elected to the Basketball Hall of Fame. After retiring from the court, she became a winning coach in the WNBA, an ESPN analyst, a sought-after public speaker and consultant, a philanthropist, and, most recently, the first female head coach in the NBA’s Development League for the Dallas Mavericks affiliate the Texas Legends.

How did Lieberman blaze such a trail and break so many barriers, both in sports and business? By developing and sticking to her own playbook for success. Now, in Playbook for Success, she gives you the tools to create a champion’s mind-set, achieve peak performance, and win in the game of business.

Your own personal coaching session with this legendary competitor, Playbook for Success speaks in particular to women who are ready to play in any business arena they choose and push themselves to exceed any limit before them. With this practical guide, you’ll get a tough-minded mix of no-nonsense inspiration, real-life examples, and hard-and-fast sports principles you can use to hone your winner’s edge each day.

Start your training today with Playbook for Success and discover tested exercises and approaches to:

* Get over your fear of success
* Assert your right to compete and lead
* Move comfortably in formerly all-male business domains
* Discover, use, and improve on your own strengths and weaknesses
* Build and lead teams to achieve goals and not give up
* Help others achieve more than they think possible

Nancy Lieberman understands the natural connection between excelling in both sports and business. Find the proven sports skills to bring your professional A-game to your business, compete, and win with Playbook for Success.