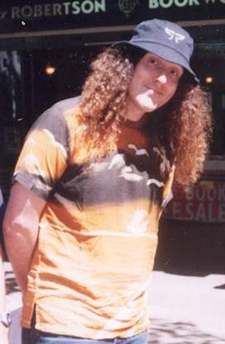 Three-time Grammy-winning music satirist Al Yankovic, aka Weird Al, will be signing copies of his debut children’s book, When I Grow Up. The all-ages events will take place on the East and West coasts and you can pre-order your copy which will come out on February 1, 2011, on Amazon.

A comedian, singer/songwriter, music producer, actor, director, and writer, Yankovic has sold more comedy recordings than anyone else in history. His first exposure came by way of the Dr. Demento radio show. Dr. Demento spoke at Yankovic’s high school in Southern California, where the then 16-year old gave Demento a tape of original and parody songs he’d recorded at home. In college, he went on to become a disc jockey for Cal Poly at San Luis Obispo’s radio station, KCPR. In 1978, he released his first recording “Take Me Down”, on the LP, Slo Grown. And the rest is, as they say, history.

Al, if you’re reading this… when I was a kid I sent a letter to you. Enclosed was an idea and some lyrics for a song parody I’d written that I hoped you’d improve upon and release as your next hit single. It was called “Blower of a Stinky Fart,” and was a parody of the Yes song “Owner of a Lonely Heart.” To this day, I don’t know if you ever got my letter!

From Booklist
In his debut children’s book, the comic “Weird Al” Yankovic celebrates individuality in an exuberantly odd, rhyming story about an eight-year-old who cannot wait to share what he will be when he grows up. Maybe he’ll be a gorilla masseuse or an artist who sculpts out of chocolate mousse. As the boy’s fantasies about his future get wilder and wilder, Hargis’ hilarious, detailed illustrations in clear line and watercolor extend the uproarious nonsense, as in a scene in which the boy imagines himself as a “big sumo wrestler or hedge-fund investor / Or smelly pit-sniffing deodorant tester.” The pictures also show the boy’s strong bond with his great-grandfather, who, at 103, is still not sure what he wants to be. Along with the imaginative play, the farce and parody make this a rare book with appeal to both kids and adults. Preschool-Grade 3. –Hazel Rochman

5 Comments on Weird Al Yankovic, Book Signing Event “When I Grow Up”