In film, Epps currently stars in the Lionsgate drama, THE DEVIL YOU KNOW (with Michael Ealy). The Netflix thriller, FATAL AFFAIR (alongside Nia Long) which was the number one streamed original film on the platform for two weeks domestically. Additionally, the Lionsgate thriller TRAFFIK (opposite Paula Patton).

Omar Epps made his film debut in 1992 in Ernest Dickerson’s urban drama, JUICE (alongside Tupac Shakur). He went on to star in the cult classic, THE PROGRAM (alongside Halle Berry), and in John Singleton’s much acclaimed film, HIGHER LEARNING. Omar also starred in Miramax/MTV’s, THE WOOD, Miramax’s, IN TOO DEEP (with LL Cool J), and in the classic romance film, LOVE AND BASKETBALL.

Other credits include Paramount’s, ALFIE (opposite Jude Law and Susan Sarandon), AGAINST THE ROPES (opposite Meg Ryan), Takeshi Kitano’s BROTHER for Sony Classics, MGM’s remake of THE MOD SQUAD (opposite Claire Danes), BREAKFAST OF CHAMPIONS (with Bruce Willis and Nick Nolte), and The Wayans’ Brothers DON’T BE A MENACE TO SOUTH CENTRAL WHILE DRINKING YOUR JUICE IN THE HOOD.

Epps is also an author, and penned his self-published memoir, FROM FATHERLESS TO FATHERHOOD. His latest offering is a fictional young adult sci-fi called, NUBIA (in tandem with world renowned publisher Penguin Random House).

Epps is immersed in the world of technology, social media, and is an investor in Plus Capital. Epps serves on the Board of Directors for The Creative Coalition, and The Peace Studio. He is very passionate about education in under priviledged areas, thus he continues to give back to his community in those forums. 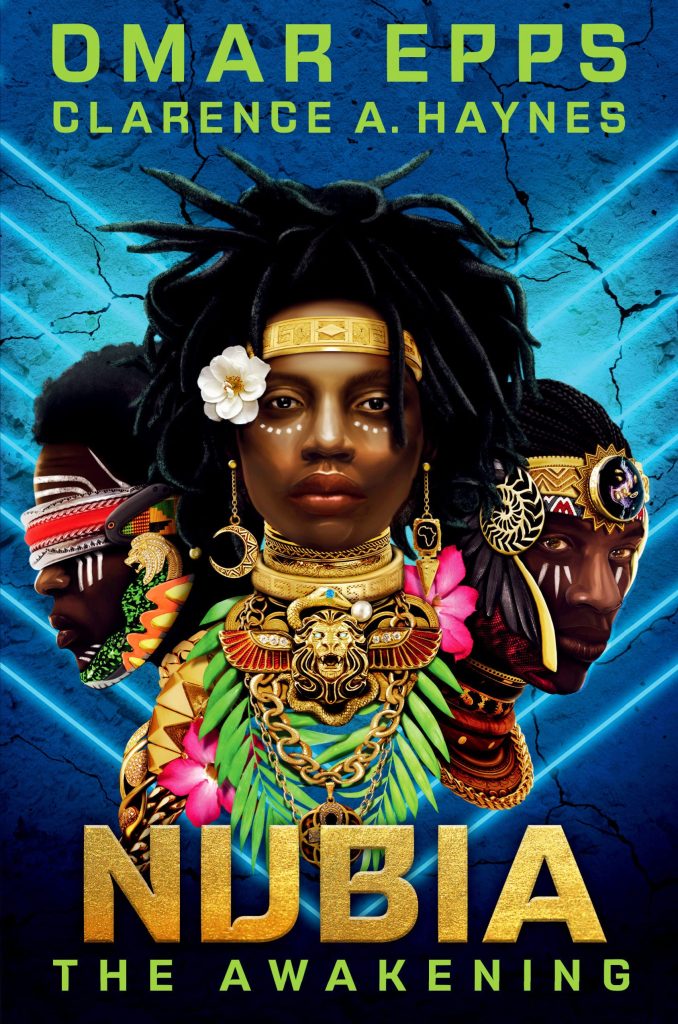 From beloved actor and producer Omar Epps and writer Clarence A. Haynes comes the biggest epic fantasy of the year. A powerful saga of three teens, the children of refugees from a fallen African utopia, who must navigate their newfound powers in a climate-ravaged New York City. Perfect for fans of Black Panther and Children of Blood and Bone.

For Zuberi, Uzochi, and Lencho, Nubia is a mystery. Before they were born, a massive storm destroyed their ancestral homeland, forcing their families to flee across the ocean to New York City. Nubia, a utopic island nation off the coast of West Africa, was no more, and their parents’ sorrow was too deep for them to share much of their history beyond the folklore.

But New York, ravaged by climate change and class division, is far from a safe haven for refugees, and Nubians live as outcasts, struggling to survive in the constantly flooding lower half of Manhattan, while the rich thrive in the tech-driven sky city known as the Up High.

To many, being Nubian means you’re fated for a life plagued by difficulties and disrespect. But Zuberi, Uzochi, and Lencho are beginning to feel there might be more. Something within them is changing, giving each of them extraordinary powers. Extraordinary and terrifying powers that seem to be tied to the secrets their parents have kept from them.

And there are people Up High watching, eager to do anything they can to become even more powerful than they already are. Now Zuberi, Uzochi, and Lencho will be faced with the choice—do they use their inheritance to lift their people, or to leave them behind. The fate of their city, and their people, hangs in the balance.