Robert Wagner, legendary film & TV actor, will be signing copies of “I Loved Her In the Movies” at various locations across the country.

Robert Wagner is the star of such films as A Kiss Before Dying, The Longest Day, The Pink Panther, and most recently, the Austin Powers franchise. On television, he starred in It Takes a Thief (with Fred Astaire), Switch(with Eddie Albert and Sharon Gless), and Hart to Hart (with Stefanie Powers). He has recently appeared on Two and a Half Men and NCIS. The author of the New York Times bestsellers Pieces of My Heart and You Must Remember This, Wagner is married to actress Jill St. John.

Scott Eyman is the author of thirteen books about the movies, including Lion of Hollywood: The Life of Louis B. Mayer (which the Wall Street Journal called one of the five best books ever written about Hollywood), Empire of Dreams: The Epic Life of Cecil B. DeMille, and more recently, the New York Times bestseller John Wayne: The Life and Legend. 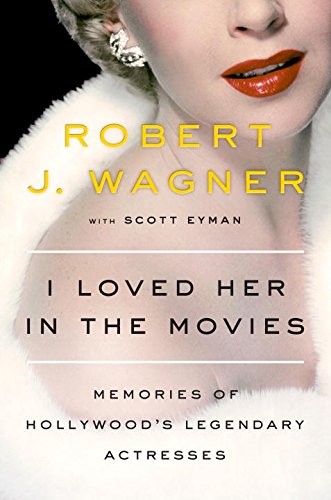 In a career that has spanned more than sixty years Robert Wagner has witnessed the twilight of the Golden Age of Hollywood and the rise of television, becoming a beloved star in both media. During that time he became acquainted, both professionally and socially, with the remarkable women who were the greatest screen personalities of their day. I Loved Her in the Movies is his intimate and revealing account of the charisma of these women on film, why they became stars, and how their specific emotional and dramatic chemistries affected the choices they made as actresses as well as the choices they made as women.

Among Wagner’s subjects are Joan Crawford, Bette Davis, Marilyn Monroe, Gloria Swanson, Norma Shearer, Loretta Young, Joan Blondell, Irene Dunne, Rosalind Russell, Dorothy Lamour, Debra Paget, Jean Peters, Linda Darnell, Betty Hutton, Raquel Welch, Glenn Close, and the two actresses whom he ultimately married, Natalie Wood and Jill St. John. In addition to offering perceptive commentary on these women, Wagner also examines topics such as the strange alchemy of the camera—how it can transform the attractive into the stunning, and vice versa—and how the introduction of color brought a new erotic charge to movies, one that enabled these actresses to become aggressively sexual beings in a way that that black and white films had only hinted at.

Like Wagner’s two previous bestsellers, I Loved Her in the Movies will be a privileged look behind the scenes at some of the most well-known women in show business as well as an insightful look at the sexual and romantic attraction that created their magic.