Jonathan Case is an Eisner award-winning cartoonist whose works include Dear Creature, Green River Killer: A True Detective Story by Jeff Jensen, and The New Deal, an Amazon Best Book of the Year which was also nominated for Reuban and Harvey Awards. He lives in Silverton, Oregon, with his family. You can visit him at jonathancase.net. 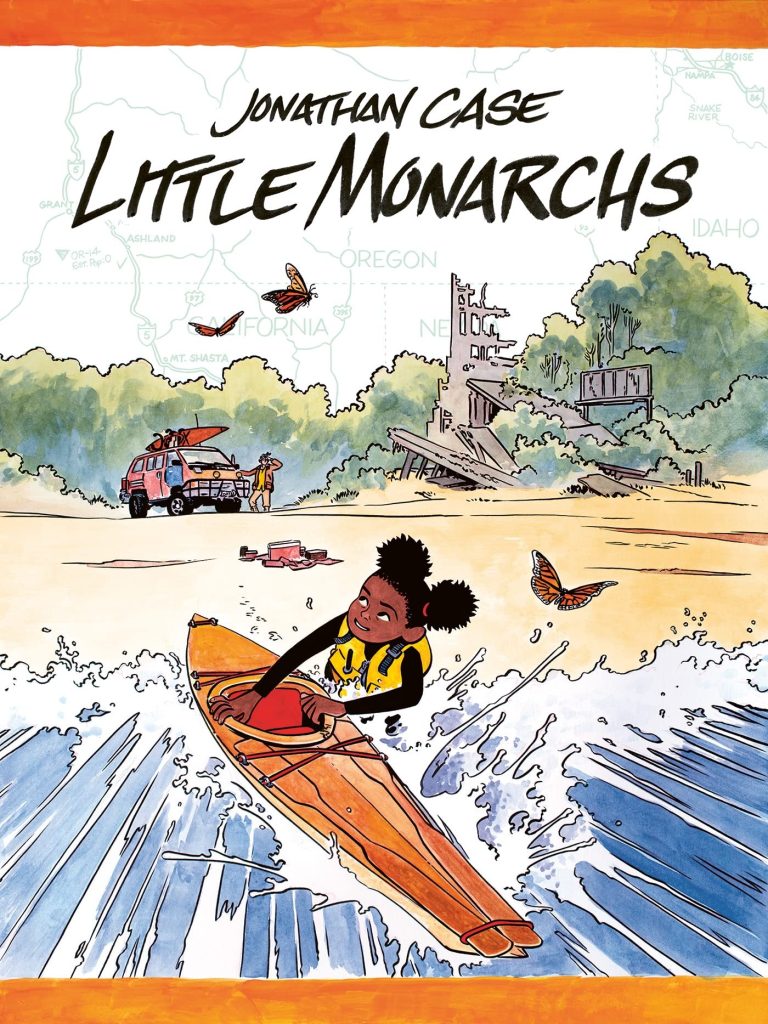 This graphic novel adventure tells the story of 10-year-old Elvie and her crucial mission to save humanity from extinction after a sun shift has changed life on earth as we know it.

It’s been fifty years since a sun shift wiped out nearly all mammal life across the earth.

Towns and cities are abandoned relics, autonomous machines maintain roadways, and the world is slowly being reclaimed by nature. Isolated pockets of survivors keep to themselves in underground sites, hiding from the lethal sunlight by day and coming above ground at night.

10-year-old Elvie and her caretaker, Flora, a biologist, are the only two humans who can survive during daylight because Flora made an incredible discovery – a way to make an antidote to sun sickness using the scales from monarch butterfly wings. Unfortunately, it can only be made in small quantities and has a short shelf life.

Free to travel during the day, Elvie and Flora follow monarchs as they migrate across the former Western United States, constantly making new medicine for themselves  while trying to find a way to make a vaccine they can share with everyone. Will they discover a way to go from a treatment to a cure and preserve what remains of humanity, or will their efforts be thwarted by disaster and the very people they are trying to save?

Little Monarchs is a new kind of graphic novel adventure—one that invites readers to take an intimate look at the natural world and the secrets hidden within. Elvie and Flora’s adventures take place in real locations marked panel-by-panel with coordinates and a compass heading. Curious readers can follow their travel routes and see the same landscapes—whether it be a secluded butterfly grove on the California coast or a hot-springs in the high desert. Through both comic narrative and journal entries, readers learn the basics of star navigation, how to tie useful knots, and other survival skills applicable in the natural world.