Ramona Emerson is a Diné writer and filmmaker originally from Tohatchi, New Mexico. She has a bachelor’s in Media Arts from the University of New Mexico and an MFA in Creative Writing from the Institute of American Indian Arts. After starting in forensic videography, she embarked upon a career as a photographer, writer, and editor. She is an Emmy nominee, a Sundance Native Lab Fellow, a Time-Warner Storyteller Fellow, a Tribeca All-Access Grantee and a WGBH Producer Fellow. In 2020, Emerson was appointed to the Governor’s Council on Film and Media Industries for the State of New Mexico. She currently resides in Albuquerque, New Mexico, where she and her husband, the producer Kelly Byars, run their production company Reel Indian Pictures. Shutter is her first novel. 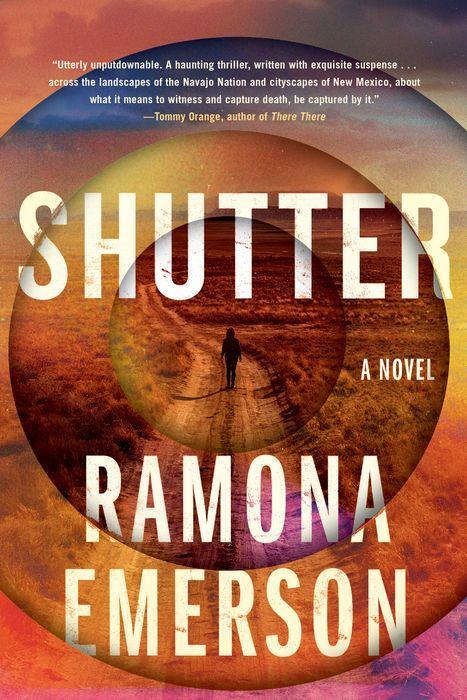 We can’t stop thinking about Shutter, a most perfect blend of supernatural and mystery. A debut novel that takes us to the limits of imagination and cuts through to the heart of the human condition. Ramona Emerson writes about dedication to family, tradition and the past that always haunts us with such ease and grace we look forward to her next novel.

Rita Todacheene is a forensic photographer working for the Albuquerque police force. Her excellent photography skills have cracked many cases—she is almost supernaturally good at capturing details. In fact, Rita has been hiding a secret: she sees the ghosts of crime victims who point her toward the clues that other investigators overlook.

As a lone portal back to the living for traumatized spirits, Rita is terrorized by nagging ghosts who won’t let her sleep and who sabotage her personal life. Her taboo and psychologically harrowing ability was what drove her away from the Navajo reservation, where she was raised by her grandmother. It has isolated her from friends and gotten her in trouble with the law.

And now it might be what gets her killed.

When Rita is sent to photograph the scene of a supposed suicide on a highway overpass, the furious, discombobulated ghost of the victim—who insists she was murdered—latches onto Rita, forcing her on a quest for revenge against her killers, and Rita finds herself in the crosshairs of one of Albuquerque’s most dangerous cartels. Written in sparkling, gruesome prose, Shutter is an explosive debut from one of crime fiction’s most powerful new voices.